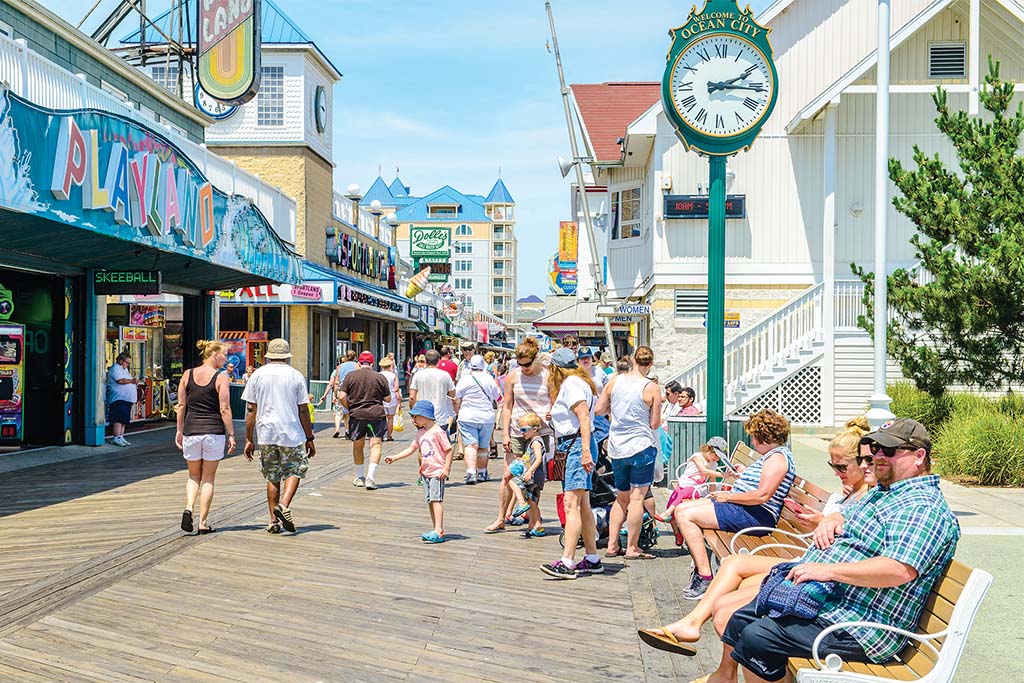 The History of One of America’s Favorite Boardwalks

Earning top honors on countless “Best Boardwalks” ratings, the Ocean City Boardwalk is one of the East Coast’s premiere destinations in the summer. Home to fabulous shops, amazing attractions and marvelous restaurants, this award-winning boardwalk comes from humble beginnings.

History of the Ocean City Boardwalk

Before vacationers populated the boardwalk, Ocean City was a sleepy fishing village until the Atlantic Hotel opened its doors to visitors in 1875. Legend has it that in 1902 several oceanfront hotel owners came together to construct a wooden walkway for the convenience of their guests. Simply known as Atlantic Avenue, this was the start of our boardwalk. In 1910, a permanent promenade was built that ran five blocks, then that was expanded to 15th street in the 1920s.

The boardwalk we see today is filled with novelty T shirts, ice cream stands and plenty of amusements and games. At its start, the boardwalk was a promenade and people would come dressed to impress. For roughly 30 years, the boardwalk was the place to be seen. Beauty parades marched down the boards while live music played from the bandstand on the beach.

By the 1950s, the boardwalk had been extended to 26th Street and the culture started to shift. The live music crowded faded away, ushering a new opportunity for amusements. City council initially did not want the new franchise to develop, but eventually gave in allowing the carnival-style amusements and concession stands to open at the lower end of the boardwalk.

For three days in March of 1962, a devasting nor’easter destroyed the boardwalk on what would be known as the “Ash Wednesday Storm.” The storm, with high flooding and strong winds demolished homes and businesses, washed away sand and sent pieces of the boardwalk floating across town. When the boardwalk was rebuilt it was expanded upon, with the downtown portion being made of concrete.

Today, with the addition of more and more attractions and hotels, the boardwalk extends to 27th Street. In 2012, the boardwalk underwent a complete renovation with all new wooden boards replacing the ones that had begun to deteriorate in order to keep in step with the same old-time, nostalgic feel.

You can still hear the old-time melodies, as children spin round and round on the carousel. The Herschell-Spillman carousel, one of the oldest fixtures on the boardwalk, is the oldest operating carousel. Take a ride and snap a picture on this historic amusement when you visit Trimper’s Rides & Amusements.

While the sounds on the beach have changed since the bandstand days, you can still hear live music almost every night. From free concerts to annual events, the Ocean City boardwalk is full of life—day or night. You’re just steps away from a live band or street performer.

Annual Events on the Boardwalk

Every May, beachgoers get a taste of summer before the heat arrives at the popular, free Springfest. Indulge in local food vendors, enjoy live entertainment and browse the stunning arts and crafts. These are just some of many activities and attractions that await. While you walk the boardwalk in June, hear jets soar above you during the Ocean City Air Show. The beach and boardwalk are your seats to this outstanding air show. Wind down the summer season at Ocean City’s largest festival, Sunfest. This free event on the boardwalk is perfect for experiencing local art, entertainment and food. Sunfest also features the Sunfest Kite Festival, where master kite flyers showcase their skills.

Beside all of the entertainment and events are delicious dining options. Have a drink by the beach at an outdoor bar, followed by a fresh-seafood feast.