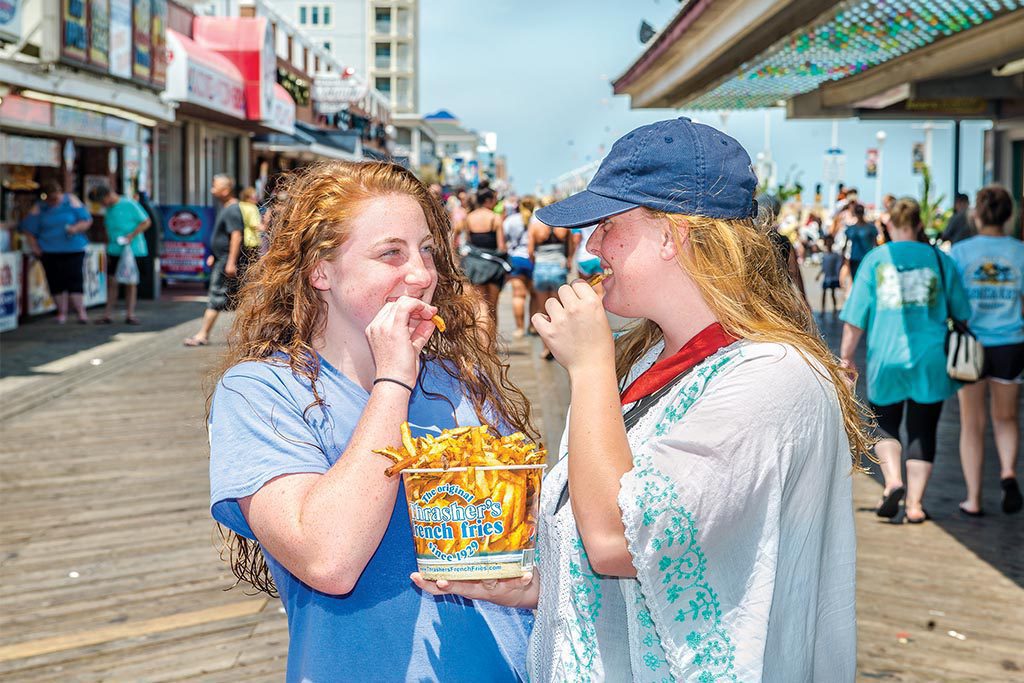 July 13 is National French Fry Day. In Ocean City, nothing goes better with the beach than a cup of salty French fries. If you head down the Ocean City Boardwalk, you’ll find a culinary landmark, Thrasher’s French Fries.

Thrasher’s French Fries began in 1929 when J.T. Thrasher moved from Georgia to Ocean City. He proposed a concession stand that would specialize in one product only, French fries. Despite some initial skepticism, Thrasher proceeded with his plan and established his fries as a staple in Ocean City.

Thrasher’s has been named “Best French Fry” locally and by a number of nationally recognized sources for several years. If you’re not a local, you should know that the best way to eat Thrasher’s fries is with salt and apple cider vinegar—no ketchup.

Things to See and Do near Thrasher’s French Fries

The Ocean City Inlet offers several sweet treats and a few pizza places, including The Dough Roller, near Thrasher’s. These, along with Thrasher’s fries, can be the perfect snack before or after experiencing the exciting rides and attractions at Jolly Roger at the Pier.

Just a few blocks from the original Thrasher’s location on the Inlet is an additional spot for boardwalk fries on 2nd Street and the Boardwalk. Near this Thrasher’s French Fries location, you’ll find additional restaurants, shops and more. After you eat your fries, treat yourself to something sweet from Candy Kitchen. Find all of your beach essentials at one of the many Sunsations locations, including one on 2nd Street.

Thrasher’s location on 8th Street and the Boardwalk is situated near several souvenir shops. Pick up the perfect keepsake or novelty T-shirt to remember your time in Ocean City from The T-Shirt Factory or one of the other nearby souvenir shops.