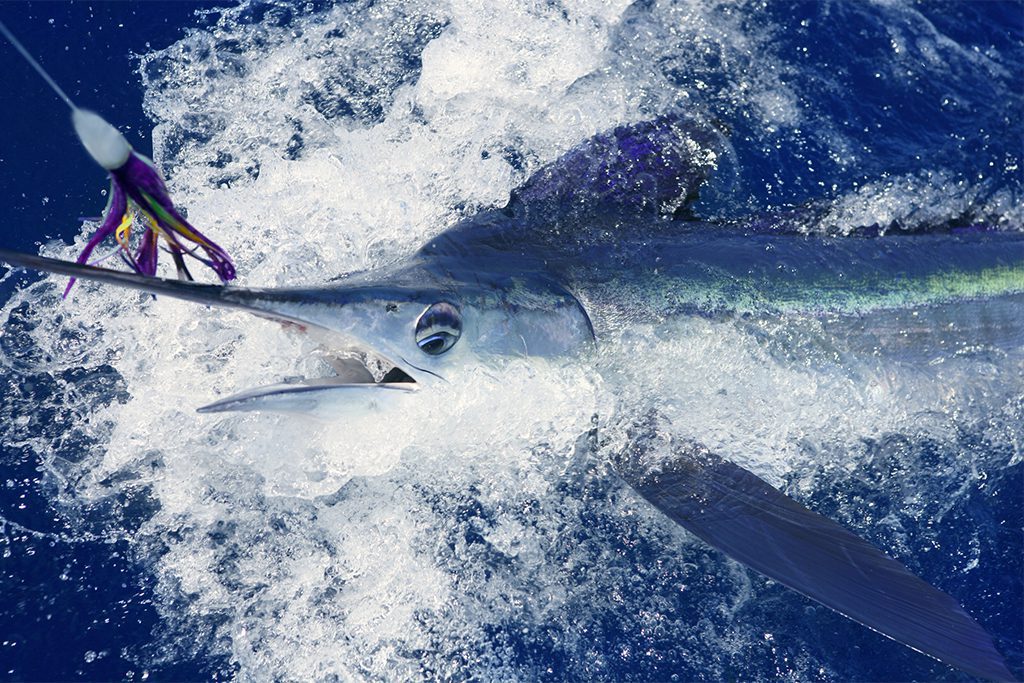 Fishing and Ocean City have been intricately connected since before there was in inlet. Heck, our former mayor was “Fish” Powell.

Fishing has long gone hand in hand with Ocean City. In the late 1800s, the beginning of the fishing industry, men would drag boats through the surf and row through the breakers to harvest the abundant supply of fish in the Atlantic. The end of the day brought the boats back to the shore and teams of horses would assist in dragging boats full of fish back up the beach. The catch would then go to the ice house located between Worcester and Wicomico Streets. Then the fish would leave by train over Sinepuxent Bay to markets in Baltimore and Philadelphia. That all changed in 1933.

The hurricane of 1933 ripped an inlet between Assateague Island and Ocean City. Now it was possible for motorized or sailing vessels to access the sea and take safe harbor. The commercial fleet was able to evolve with larger vessels and docks to unload. A new fishery flourished, that would be the offshore fishing industry. In 1939, after 171 white marlins were boated in a single day at the “Jack Spot,” Ocean City became known as the “White Marlin Capital of the World.”

Marlin fishing may get the most publicity but there are many other species pursued from the docks of Ocean City. Near shore wreck fishing is a staple of the industry in Ocean City. Anglers on “head boats” venture out daily to catch tautog, seabass, flounder and trigger fish. These boats are so named because they charge “per head.”  You can see the Ocean Princess, the “Morningstar” or the “Judith M” motoring out of the inlet every morning. If the ocean isn’t your cup of tea, many opportunities exist for fishing from land or small boats in our coastal bays.

The bays and inlet offer rockfish, flounder, blue and toutog. Croaker fishing gets hot in late July and August, while red drum and rockfish round out the year. You can fish from the inlet jetty, the Ocean City Bridge, or any of the privately-owned fishing piers. Public fishing is allowed on the bulkhead from 2nd–4th Street. Anywhere you fish you’ll need a Maryland fishing license.

Dolphin, tuna and mako shark provide an exciting fight and great dinner to boot. These adventures take you out to the famous canyons nearly 60 miles off shore in the Gulf Stream. Closer to shore, there are numerous wrecks and man-made reefs which hold many species of fish. Head boats allow you to hunt these fish for a reasonable price and a safe, comfortable ride. Your captains provide bait, tackle and rods on board and keep your catches fresh until you’re back to the dock.

To this day, fishing and Ocean City are inseparable—so much so, we host the White Marlin Open, the largest billfish tournament in the world. Hundreds of boats and thousands of anglers from all over the world converge on Ocean City during the first full week in August. This tournament pits men and women against each other and the sea for bragging rights and millions of dollars in prize money. Harbor Island is the official weigh station, and the carnival-like atmosphere is a delight to spectators. The event is free and open to all ages. If you are lucky enough to be vacationing in August, take a few hours for the exciting White Marlin Open; you might just learn something, too!

Before You Head Out on the Water

When on our shore or coastal bays, those with their own boat are allowed to search for flounder, trout and rockfish. There are public boat ramps in both Ocean City and in the county, which provides access to all parts of the bay. Don’t have a boat? Many of Ocean City’s marinas rent a variety of boats including a fishing skiff to a pontoon boat. Either way, the area’s bait and tackle shops will provide you with all you need for a day or night of fishing. Here’s a tip: If you ask nicely, they may even tell you where the “secret fishing spot” is.

If you’re more of a land lover, Ocean City has public access for fishing at Northside Park and the bulkhead from 2nd to 4th street on the bayside. Both locations do not require a fishing license. A fishing license is also not required on the two private fishing piers. All other areas and boats require a license from the Maryland Department of Natural Resources. Several tackle shops sell fishing licenses and you can go online to see what materials you need.

Click here to read about pier fishing in Ocean City.

From the coastal bays to the Gulf Stream, Ocean City offers a wide variety of fishing opportunities. Whether you are a serious angler or just want to spend some quality time with the family, nothing beats a day on the water.

Click here for more information about fishing in Ocean City.

Click here to read about purchasing a Maryland Fishing License.